Vaping has become a cultural phenomenon that has no equal in the modern age. Vaping devices exploded in popularity over the recent years, but the devices have been around for quite some time. Once the public started understanding some of the conveniences of vaping over smoking, there was no going back. New manufacturers spring up left and right in an attempt to take advantage of the booming vape market. But how much do you really know about vaporizers and the people who use them? Below are 7 stats about vaping that you’ve probably never heard.

1. Vaping costs roughly half as much as traditional cigarettes.

The average cigarette smoker spends just over $2,200 per year on cigarettes, but the average vaping enthusiast only spends $1,100. There are cases were vaping systems may be more expensive in a year’s time, depending on the type of system and e-liquids used, but the vast majority are more economical than cigarettes. This helps the general smoking population migrate from cigarettes to vaping.

The vaping industry is still in its infancy, so those who have committed early by investing in stores are seeing the benefits fly in. The result is that new businesses are forming at an amazing rate, and some who own a single vape shop are investing in second and third branches. Eventually the market will stabilize once the supply of vape shops is able to meet the high demands of the market, but all vape shops are thriving for now. Customers seem to prefer shopping for vaping supplies in person instead of online since the knowledge of a salesman helps them make informed decisions.

Don’t be fooled by the naysayers out there claiming that vaping devices are just as harmful as cigarettes, because that simply isn’t true. Propaganda is an important tool in achieving a certain agenda, so those types of stories are perpetuated by those who want to believe them. Studies have shown that vaping is considerably safer than smoking cigarettes, and what little damage remains is caused by the nicotine itself and not the vaping device. There is no evidence whatsoever that vaping harms your body anywhere near as much as smoking cigarettes.

4. Vaping is 29% effective at helping someone quit smoking.

Not everyone who tries vaping decides to use it as a means of quitting smoking, but those who do have a 29% success rate at the 6-month mark. This is one of the most effective methods of quitting smoking available, and it works because it gives the smoker the ability to slowly ween off the nicotine. E-liquids come in a variety of strengths, and many vaping enthusiasts have to discover their ideal concentration. Once they find it, they can slowly decrease the concentration every few weeks until there is none in the solution at all.

That’s right, roughly one fifth of the entire population of smokers in the United States is comprised of vaping enthusiasts. Considering how much their popularity has risen in the past few years, that number is staggering. It is likely that number is only going to continue to grow, especially since 79% of people who bought a vaping device decided to keep using it or bought another. The demand for these devices is clearly there, so as long as manufacturers keep hearing the call, they’ll keep pumping out new products for the market to try.

It may be surprising, but there are more people buying zero-nicotine content through 6mg/ml than people buying the concentrations higher than that. 6mg/ml is an incredibly low amount, and the reason behind this popularity is that it allows the vape user to vape more, plain and simple. Less nicotine means more puffs, which is why vaping enthusiasts do what they do. They enjoy the act of vaping. That’s why some e-liquids are designed with a high level of vegetable glycerin, which generates massive clouds. Some vape users only want to vape for the experience and the flavor.

7. Vaping devices are, in fact, regulated by the FDA.

It is a common misconception that vaping devices and e-cigarettes are not regulated in any way, but that is not true. The FDA recently enacted new regulations that classify all nicotine-derived products as a form of tobacco, meaning the devices are subject to all laws to which tobacco is subject. The industry is already heavily self-regulated thanks to the numerous professional manufacturers and suppliers working with the devices and e-liquids, but the new regulations will exist to control who can buy them and where. This is meant to drastically reduce any issues with teens using these devices.

Vaporizer and Vape Statistics Infographic for 2016-2016 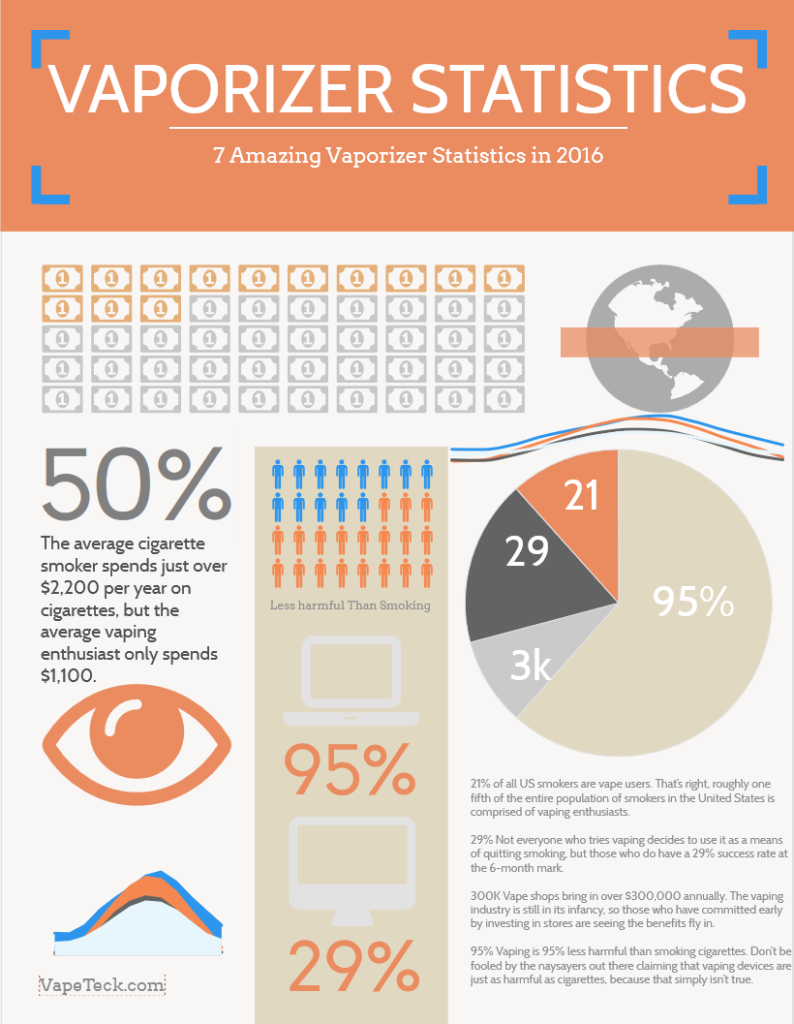